I started bashing out a rushed reply to the following comment, and then realised that the reply might build up to be as long as a proper post. So why not? Why not a proper post as a response? So here it is...

Hi! I live in Zurich and we are considering a Huf House project...So far we are looking to nuy a house and demolish, as you know there are no bauland, and the ones that exist are unaffordable. So far, I have found aorund the Zurich proximity at avge 1.5 mill Chf...sigh....

My question is about planning permission, I am looking for a house around 200 sq mts, or similar to yours, I like the flat roof model, did you have any challenges to get permission?

On another note, I see you mention an architect, do you need to hire one mandatory? We are hoping to benefit from the strong chf vs euro, after a few years, do you recommen the approach vs a traditional build after you had some time to live on it? thank you for your tips any wordof advise welcome!

The easiest place to begin is with the real estate situation here in Switzerland.

Strangely, Swiss mortgage interest rates are at their lowest since records began, the housing market forgot to plummet along with the rest of the world, the economy is more or less intact... and so, wonder of wonders, Switzerland seems to be the last bastion of rock-solid house prices, and, therefore, rock-solid land prices.

Or the land prices would be rock-solid if the damn things didn't keep going up up up.

Going up? We can understand the prices remaining stable, but going up?

So what's going on?

Well, a combination of factors: the obvious one is that most of the flat bits of land around this part of Europe were thoughtfully claimed by France, Germany and Italy, using little more that swords, ploughs and crosses, leaving the steep and rocky bits for the Swiss to scratch out a living. Ergo, any remaining flat land in Switzerland invariably has a tractor upon it, and very strict laws against conversion into residential use. Next, the Swiss understandably want to live within a few kilometres of wherever they work. This is a life/work balance thing that they've got right and therefore that everyone else has got wrong.

Ergo, too little available building land for geopolitical reasons, and certainly too little around the few cities that anyone with the wherewithal to spend tonnes of money building a Huf Haus could conceivably work in.

So land prices go up up up, because the bulk of it's been built on yonks yonks yonks ago. And there's not much more to come, unless the Swiss decide to annex Belgium.

Kind of sets the questions above into context, methinks.

So, to make my first point: yes, finding land that happens to have a wreck, 60's bungalow, or otherwise undesirable object, upon it, is a worthy strategy. Certainly a more successful strategy than searching the classified for that hen's tooth of a grassy building plot. That doesn't exist, so don't even look. And that's the thing about Swiss real estate that Auslander's (you lot) don't know; undesirable houses are worth... pretty much the value of the land it sits upon, and nowt more.

The Swiss rarely renovate. Maybe they don't have to, cos their well-designed, well-built and well-maintained houses don't actually get round to falling to bits. But very occasionally a wreck or dump does become available when some aged miser finally pops his clogs, and the inheriting family are clueless what to do with it. Selling's a lot easier than cleaning it. Or painting it. Or replacing kitchen and bathroom.

So worth keeping an eye out for.

Planning permission strategy? Well, Switzerland's pretty much like the rest of Europe. There are Gemeindes (local authorities) that like the idea of something like a Huf Haus, and then there're the many, many Gemeinde's wot don't. The ones that do like the idea tend to be more urban, closer to the lake, in lower tax areas (let there be no obstacle to relieving the rich from the burdens of taxation); the ones that don't tend to protect their cheerful Swiss villages by ensuring that any new house conforms to the steep, red roof uniformity that makes them so quaint in the first place.

Actually, fair dos on that point.

And specifically to answer the question, anywhere like Meilen, Richterswil, Kusnacht and Erlenbach would do nicely, if seeking to build a flat-roofed Huf Haus. At twice the land prices of anywhere else, cos they're low taxation areas, purposely set low to attract the rich, 'cos the (low) taxable income of a handful of rich is mightier that the (high) taxable income of the great unwashed.

Anywhere more rural-like where yer perfect Huf Haus would have the perfect view to match would likely be guarded by a Gemeinde planning department (in practice one bloke) who will fight you tooth and nail, unless he's one of the very few enlightened. And when you best the planning department (him) using the full legal powers that you're entitled to (entitled to pay handsomely for, that is) you'll have found that two years have passed, and maybe, just maybe, you've gone off the whole idea. Sod it.

Which is exactly what happened to the previous owners of the land upon which our Huf Haus sits upon. They battled for two years, got pissed off with the endless stream of obstacles (to be fair, they wanted a few additions that would be hard for any authority to swallow) and even though they won most of their hard fought battles, and got that planning permission (sans unpalatables) the magic had gone. So they flogged the land with planning permission for a Huf Haus to Claudia and I, and then waved goodbye to this particular Gemeinde forever.

The little beaurocrat will out in the end. He's now working in the (bigger) Gemeinde next door leading a planning department of three, with governance over his successor at our Gemeinde. The power, the power. The Webers (for it was they) moved to Bern, and chased other dreams.

Still, not a bad plot of land for Claudia and I to find on our second weekend's drive round the Zürich area searching for hen's teeth. And with a fresh Baubewilligung (permission) for a 3-axis Huf Haus of the same shape and size as we wanted. We changed almost nothing. Saved us a year or two of wrangling. Sigh. You may call us what we are. Lucky, lucky sods.

So what's my advice to the world, assuming not everyone is quite as jammy as we were?

Build in an expensive (low tax in the case of Switzerland) area and find that CHF 3 million for the land. They'll let yer build an Eiffel Tower out of lollipop sticks and donkey spit if it'll mean your income'll contribute to the tax pool of the area.

If the local (Gemeinde) planning regulations stipulate a certain size, roof profile, distance from road or boundary, building colour, or whatever, then submit a plan wot says exactly that. Nay! Make it even more conservative, and slice 50cm off every dimension, include a wall or hedge to protect the neighbours from the "horror" of looking at a Huf Haus... actually, to protect your view from their derivative blot, but the Gemeinde doesn't have to know that. If they demand red roof tiles "to fit in with the character of the village" then get used to the idea. If they insist on a pitched roof "because of the threat of snow overwhelming the structure of the house" then give up on the flat roof idea.

Or build something else.

Stop! All too negative! Look, your Huf Haus system can be physically tailored to fit into almost any set of planning rules. Few, if any, regulations stipulate a maximum window surfacing, or the colours of the walls or beams. Yer pitched roof comes with roof tiles, which is as conservative as it gets, so they can't bitch about much more than the colour. The structure (post and beam, pitched roof) itself is as traditional as it gets in Europe, short of a mossy cave.

But how to add those features to make it special?

Well, the inside's a blank canvas for a start. But this post's inherently about the outside, so inside's for another day.

There're various things you can do outside that can equally conform to the planning regulations, if you're guided properly. Which is how I answer the second question. Yes, you need an architect. But not just anyone out of the Yellow Pages. In Almita's case, that architect's basically Mr Huf Haus Switzerland (not the case when he built our house, merely the recommended architect, but the meek inherited the franchise) and I can recommend him wholeheartedly. No one has better experience as to what fits into local regulations, Huf Haus-wise, than he (actually, He of the Bowtie, none other), and no one knows better how to deal with the factory, arrange for blokes with diggers to make keller-shaped holes, yadda yadda yadda.

And that'll be the case anywhere else in Europe. Talk to the Huf Haus people, and let them recommend the architect. Skip the suspicion that it's some kind of job for the boys. Because it is a job for the boys. Tried, tested and proven boys.

And would I still recommend building a Huf Haus rather than a traditional build?

Well, watch Grand Designs and see for yourself. Everyone else is grateful for the project part to be over, for the planning arguments to be at an end, for a stop to the disappointments with building contractors, with the spiralling costs, hurrying Mr McCloud past this or that unfinished room years after they moved in. Sod that. Claudia and I still think back to the project part of our build as one of the best experiences of our lives, and for the good reasons, rather than for those character-building reasons that other people have to cling onto.

Not meaning to disrespect the traditional build mob, or their choices, you should understand. They've earned plenty of my respect as I watched them (on the telly) overcoming all sorts of adversity that I couldn't be bothered with.

Please, Dear Huf Haus Hopeful, do cast your eye across the above words a few times more, and try not to let your dream get twisted from the outset by an unnecessary (losing) battle with the authorities. Why make it hard for yourself? Conform enough to meet the regulations, using the sage advice given by experienced professionals, and even if you do have to make some compromises, I can promise you one thing, and these are the exact parting words of the embittered Frau Weber who sold us the land:

It'll easily be the nicest house in the village. 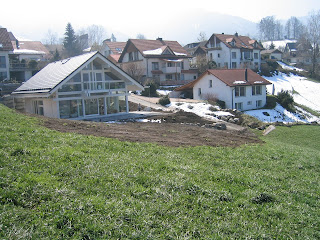